Henry Culbert was the first-born son of John Culbert and Mary Ward. Born 17 March 1837 in Ireland, Henry was only three years old when he made the journey to Canada with his family, settling in Biddulph Township, Middlesex County near Lucan, Ontario on Lot 19, Concession 2 (The Coursey Line.)

Henry was the first of John and Mary's children to move away from Biddulph Township. I don't know what year he moved to Huron Township in Bruce County (known today as The Township of Huron-Kinloss) nor do I know why he moved away. I do know that he kept in touch with his family.

Henry married Margaret Wall on 25 January 1862 in Bruce County. Margaret (born 1838) was the daughter of pioneers Moses Wall and Ellen Greene. Moses, born in 1806 was one of several Walls who came to Canada from Tipperary, Ireland. 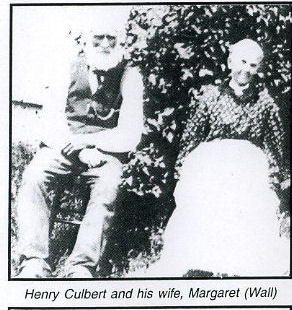 Henry and Margaret bought a 100 acre farm at Lot 3, Concession 8 in Huron Township, near Ripley, Ontario. 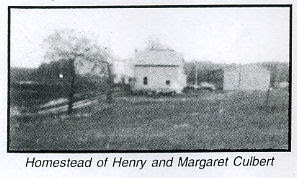 Henry and Margaret had six children. They retired to Ripley in 1898.


Henry is shown in the image below as one of Ripley's long-time residents...

As you can see from the information on her death certificate below, Margaret (Wall) Culbert died 16 June 1917. 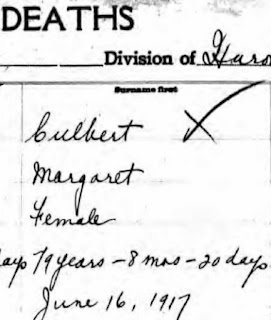 However, her headstone says 18 June 1917. Henry died three years later on 21 June 1920 and the funeral service was held at the home of his son, Thomas Ezra Culbert.

Numerous descendants have chosen to remain in Bruce County but many have ventured further.

One blog post isn't enough to outline all the descendants of Henry Culbert and Margaret Wall. From time to time, I'll write about their various descendants.

If you have photos or stories to contribute about any of Henry's descendants (including yourself!) please email me at this address: 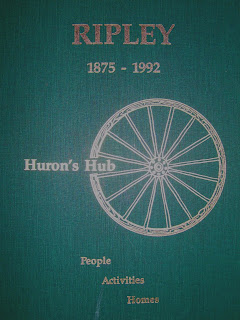 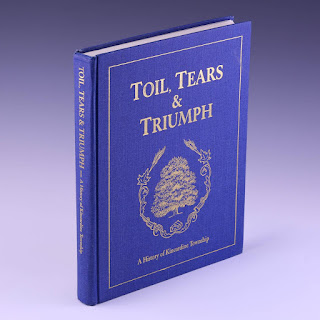 The Culbert Family History blog presents a memoir of Arthur Hall, written by his daughter, Lynda Hall Hunter. Arthur was the great-grandson of John Culbert and Mary Ward.


ARTHUR HALL: A memoir by his daughter, Lynda Hall Hunter

Dad was in his twenties when talk of war loomed close. Like so many other Canadian men, he was anxious to join the effort. Tired of waiting for Canada to completely commit, he went to Toronto and signed up with the British Navy, under His Majesty King George V. From there, he served with The Royal Naval Canadian Volunteer Reserve (R.N.C.V.R.) Overseas Division as an Ordinary Seaman and was later ranked as Petty Officer.

After three months of training with the British Navy, and Canada now fully involved in the war effort, he asked for a transfer into the Canadian Naval Service. He was assigned to different sea-going ships; Victory, Idaho, Vivid 111, and Niobe from November 29th, 1916 to April 5th, 1919. 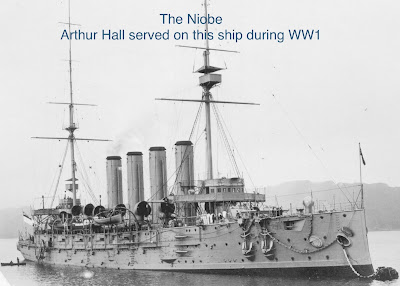 Dad served on the Niobe the longest where it patrolled the approaches to the St. Lawrence River, and then joined the Royal Navy’s 4th Cruiser Squadron to patrol off New York City. At one point, the Niobe was engaged in intercepting German ships along the American coast. For the most part these ships were on minesweeping duties.

Before WWII broke out, Dad had joined the Militia Infantry, in London, Ontario. After many courses, he qualified as Major Arthur Hall.

On September 18th, 1943 he married my mother, Roberta Iola Cowan.


Dad had an incredible thirst for reading. One of my jobs as a teenager was to go the library for him and collect 10 or 12 books at a time. I remember telling my boyfriend (my husband now) to look for a small pencil mark on the back page. If there was a mark, return it, and keep looking. After a couple of hours, we finally came up with enough books. For dad, these books were like new found treasures. I also remember many times pulling a loaded wagon full of books to trade with Lorne Hall Sr. Apparently Lorne had the same affliction.

It was rare to see dad sit down at the dinner table without a tie and suit coat. It was amusing to watch him fuss with his serving dishes so that his food choices didn’t touch. I can’t imagine what would have happened if the stewed tomatoes dared to touch the mashed potatoes. As usual as it was to see him in a tie and suit coat at meal time, it was just as usual to see him out (pre-dawn) weeding his garden in his pyjamas.

He loved to play cards, especially cribbage, and excelled at crossword puzzles. He read as many newspapers as he could get his hands on, and Perry Mason was his favourite TV show. And for him, there was nothing better than dropping by the Legion for a visit with his old war buddies.

Arthur Hall is buried in Kincardine Cemetery.
at August 28, 2018 No comments:

This post will be of little interest to you so if you have something better to do, like watching paint dry, for instance, now is the time to do so. 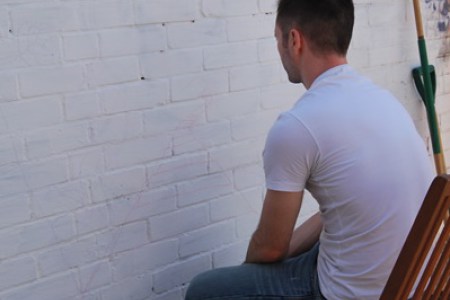 However, if you're a descendant of Richard Culbert & Ann Jane Harlton, please contact me at this email address:

With this post, I'm hoping to attract and connect with descendants of Richard Culbert & Ann Jane Harlton. Call this post "bait" if you wish.

We know that Richard Culbert & John Culbert were probably brothers. If you missed the post about Richard & Ann, click here.

This is a partial list of the descendants of Richard Culbert & Ann Jane Harlton.

Please note that this list is incomplete and the dates have not been confirmed. There may be errors in this list so please confirm everything before adding this information to your family tree.

DETAILS OF THE CHILDREN OF RICHARD CULBERT & ANN JANE HARLTON AND THEIR DESCENDANTS:

HELEN CULBERT (c1844-?). Daughter of Richard & Ann.
Helen may have died young. No records to show that she married or had children.

WILLIAM CULBERT (1863-1935).Son of Richard & Ann.
Married Jane "Jennie" Thomas. They lived in London, Ontario. William died in Michigan. I have no record of children for this couple.

Of course, there are many more people to record but this gives you a general idea of the descendants of Richard Culbert & Ann Jane Harlton. DNA testing proves that Richard is related to my ancestor, John Culbert. Richard and John were most likely brothers as they purchased land next to each other in Biddulph Township in 1840. Later, Richard and his family later moved to Lambton County, Ontario where many of his descendants live.

If you're a descendant of any of these people, please email me at this address:

The Culberts Next Door - Richard Culbert and Ann Jane Harlton

Thanks to Ancestry DNA testing, we know that Richard is definitely related to our ancestor, John Culbert.

Was he John Culbert’s brother? His cousin? And why did Richard and Ann later move away to Wyoming, Ontario? No one in my family could answer that question so I set out to see what I could discover.

This Richard Culbert (not to be confused with John and Mary’s son of the same name) was born circa 1813 in Ireland.

Skipping ahead a couple of years to 1842, the Assessment List and Population Return for the Township of Biddulph shows John Culbert with 100 acres on Lot 19 and Richard Culbert on Lot 18 with 100 acres.

These records prove that John and Richard purchased land at the same time (October 1840) next to each other.


So there they are, living side by side. But how were they related? We don’t know. John was born c1806 so he was about seven years older than Richard. However, there’s no mention in any of the documents as to their family relationship. 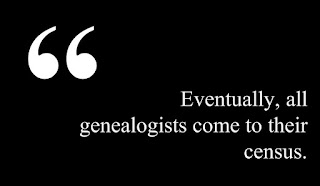 A decade goes by. The 1851 Census (taken in 1852) gives us more information about the family. At this point, Richard and Ann have five children; John who was born in Ireland; and Elizabeth, Helen, Sally Ann, and Catherine who were born in Canada. (Sally may have been a nickname for Sarah.) (Note for family historians: In 1851, Ontario was known as Canada West, and Biddulph Township was at the time part of Huron County, not Middlesex County.)


Fast forward to 1861. The Richard Culbert family have left Biddulph Township. They’re living in a log house in the village of Wyoming in Plympton Township, Lambton County, Ontario.


The 1861 Census shows a couple of changes to the Richard Culbert-Ann Harlton family. A new member of the family is listed: a daughter, Rebecca Culbert. Daughter Helen’s name has been crossed out and I haven’t seen any reference to her since that time so Helen must have died.


So somewhere between 1852 and 1861, Richard Culbert and his family moved away from Biddulph Township to the Village of Wyoming in Plympton Township, Lambton County. Can we narrow down the date they moved? Yes, we can. Their daughter, Rebecca was born 31 May 1854 in Plympton Townhip so this means the Richard Culbert family moved to Plympton Township in 1854 or earlier.
Why did they move away from Biddulph? We don’t know. Lambton County was experiencing rapid growth and prosperity so it’s possible Richard thought he could do better there.

In any case, the Richard Culbert-Ann Jane Harlton family was never again mentioned in any talk I ever heard from my family members. It’s as if they never existed. Yet there they are on the Census form, and the Ontario Archive Land Record Index, and the Assessment List, showing they lived one property north of the John Culbert-Mary Ward family. It may just be because it was so very long ago that memory of them was diminished through time. Or perhaps they lived so far away that the two families lost touch.

Richard and Ann’s last child, William Culbert was born in 1863 in the Village of Wyoming.

A couple of decades later, the 1881 Census shows Richard and Ann, now in their 60s, still living in Wyoming. Most of their children had moved out except William and Catherine. Also in the household was Catherine’s husband, Alexander Morden and their son, George Morden.


Ann's obituary says that “her aged partner still survives her, although he has been scarcely able to move around for the past year or two. They spent over fifty years of married life together, and are among the oldest residents of the village."


At some point, the widowed Richard went to live with his daughter, Catherine Morden and her family who also lived in Wyoming. He died on 10 March 1894, age 82 of bronchial pneumonia.


It doesn't take a brain surgeon to figure out that John and Richard are probably brothers. However, as yet, there's no documentation to prove it. Through DNA testing, I've established that Richard Culbert and his descendants are definitely related to John Culbert and his descendants. Eventually, I hope to have a breakthrough and find more details. Please consider taking the Ancestry DNA test. Your DNA may unlock the secrets of these two Culbert men.

Note: The next post will discuss the descendants of Richard Culbert & Ann Jane Harlton. 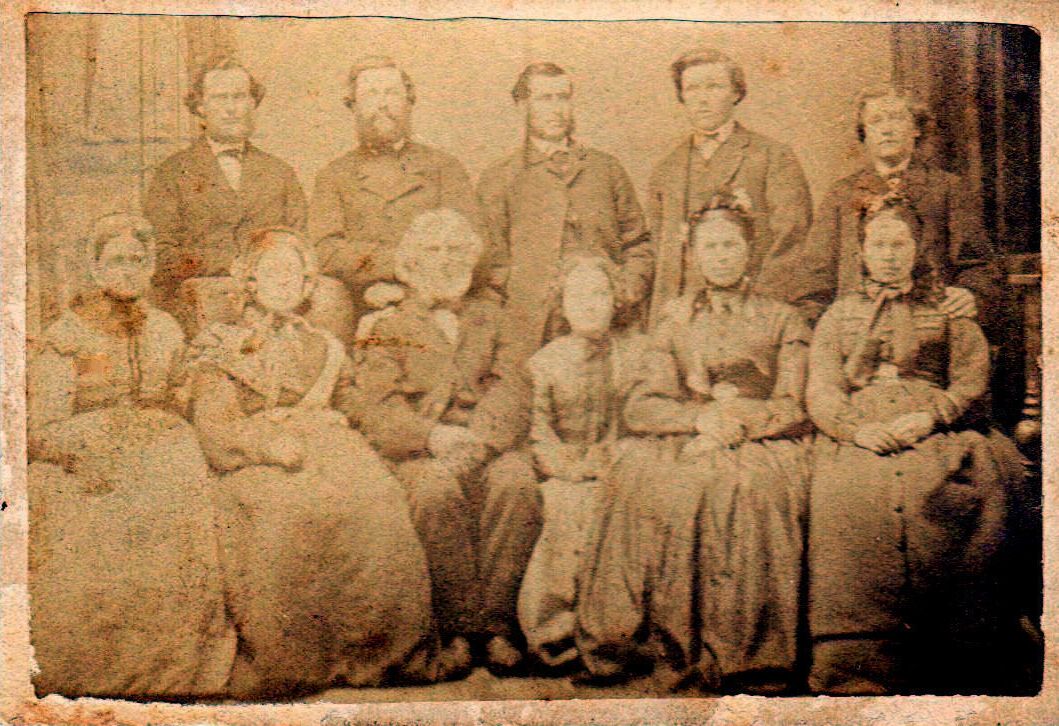 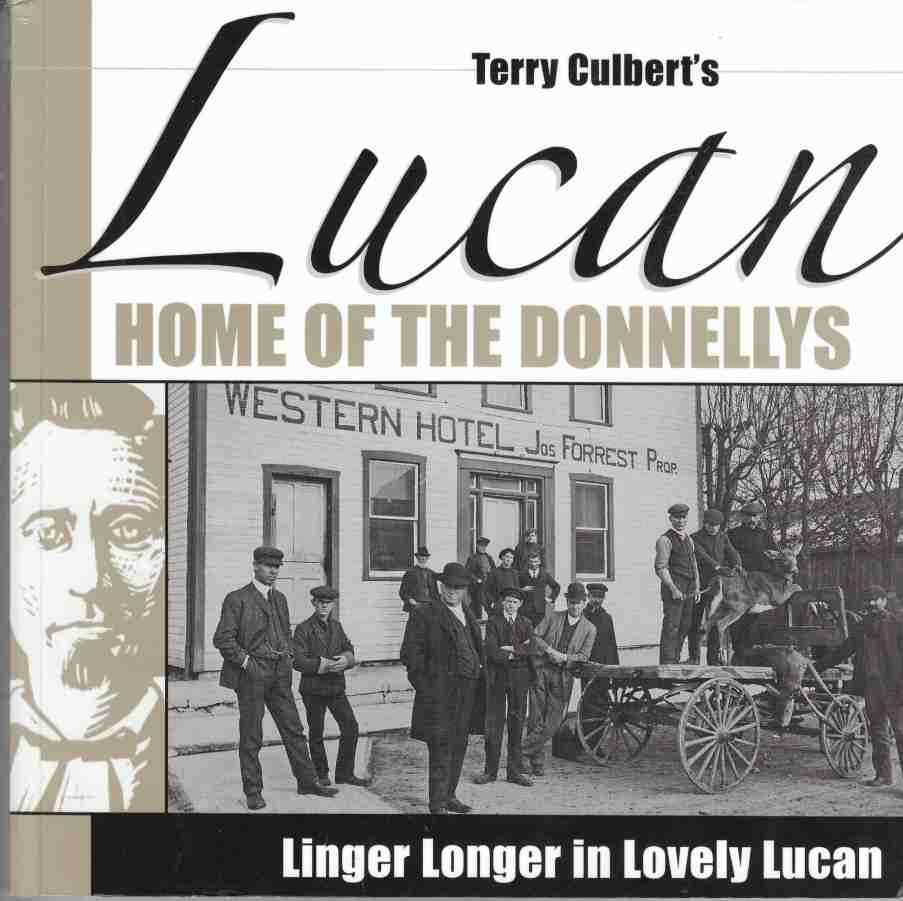